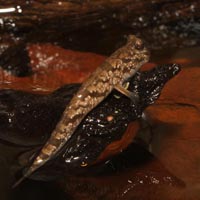 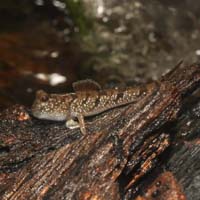 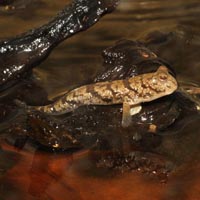 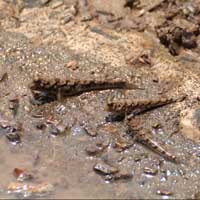 General information: Found in tidal creeks in brackish water and fresh water in the tidal parts of estuaries. The specimens in the photos were caught in a large NT tidal river in full fresh water after the wet season. Mudskippers are good climbers so a lid is necessary. They are relatively easy to keep, suggest slightly brackish water with 5 to 10 parts per thousand marine salt. Water about 100 ml deep and plenty of places where they can climb out of the water. They are used to air temperatures of 24 at night to 32 during the day time so if they are in an aquarium in a cold climate consideration should be given to a fully enclosed lid so the air stays warm as well as the water. Temperature of the water is best kept about 26 to 27 Deg C. They will eat most prepared foods such as small pellets, frozen brine shrimp and freeze dried insects. They also eat prepared minced pea and prawn puree. After a while they will get tame and jump on your hand at feed time. Place the food on a sloping surface near the water and they will eat off that wet surface. They also take food under water.