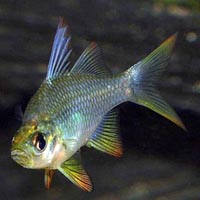 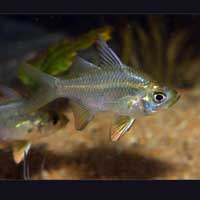 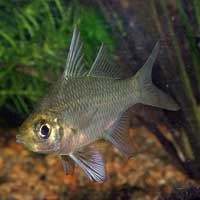 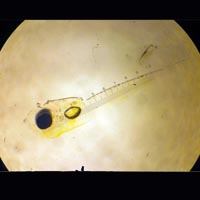 General information: This glassfish grows to about 9 cm, it lives in deeper billabongs and rivers along steep banks, dense aquatic vegetation and near fallen trees. It forms large schools in some places, such as the Adelaide River but sometimes just found in twos and threes as in the Roper Drainage. Adult fish have a drab grey olive colour with black border on the scales forming a reticulated pattern. One of the other common names for this fish is reticulated glassfish. The colour of the fins varies, the specimens from Darwin River can have reddish fins, the specimens from the Adelaide River have a mauve colouration in the fins when caught but can change to yellowish with red tips as the fish in photo one. All the fish in the photos are from the Adelaide River in the Northern Territory. It is a carnivore and the natural diet is reported to be small aquatic insects, small crustaceans and fish fry. A captive diet should include live foods if possible as well as some frozen insects and small crustaceans. The fish at Aquagreen are cultured by adding about 20 adults into a five thousand litre 1.1 meter deep pond. Plants such as Vallisneria or Hydrilla are grown on approx 25% of the area. The pond is seeded with plankton and fertilised before the fish are added. Once a bloom of moina are present the adults are added, then also fed with some aquaculture crumble supplemental to the plankton. They spawn in the the vegetation. Fry are approx 4 mm long when hatched. The pictured fry is a week or more old at approx 5 mm. First foods are most likely freshwater rotifers that occur with the plankton in the pond. Attempts to spawn the species in a 600 litre planted aquarium have been unsuccessful. It is a nice small fish for the larger community aquarium, it is peaceful toward anything that wont fit in its mouth. It is a schooling fish and best kept in a group of half a dozen or more. The water these are found ranges from 22 to 34 deg C, pH from 7.5 to 9.7, hardness about 100 ppm, alkalinity about 90 ppm. They are cultured in water approx 27 Deg C, pH around 7.5, hardness about 100 ppm, alkalinity about 60 ppm.

Distribution : It occurs from Kimberley Region of WA across the Northern Territory to the Jardine River in Queenslans. Also occurs in the Fly River region of New Guinea.