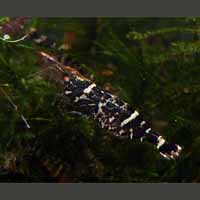 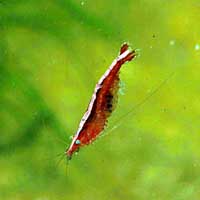 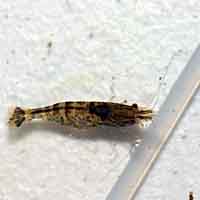 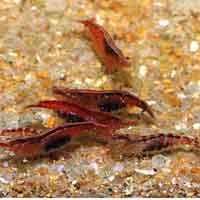 General information: This small shrimp was previously identified as Caridina serratirostris as it is very similar in shape, colour and habits to this species. However Dr Tim Page of Griffith University was kind enough to run tests on the DNA of this shrimp. Dr Page wrote - Your C. serratirostris from Howard River, Gunn Pt. Rd Xing, Darwin Area groups with C. sp. WA 4 (Page et al. 2007) from WA. It is not C. serratirostris, which I also have in the tree. The other specimens I have of C. sp. WA 4 come from the Fitzroy and Ord Rivers (WA). These serratirostris-like species are very divergent from other Caridina, and I think that Yixiong Cai from Singapore, who is working on them at the moment, might move them to a new genus. We are thankful for the help from Dr Page. It is a very small species of Caridina that lives among Vallisneria beds and leaf litter in its natural habitat here in the top end of the NT. It probably has similar diet to other small similar shrimps which are a scavenging omnivore and will eat periphyton, the layer of algae and bacteria adhering to the hard surfaces in a submerged environment. In the wet season floods it leaves the river bed and can be found in the grassy areas in shallow water at the edges of the flood.

Cultivation notes : Best kept in a small aquarium without any fish. It is a small species and would be easy pickings for any fish especieally during moulting time when crustaceans are most vulnerable. The petshrimp web site suggests using weathered leaf litter, http://www.petshrimp.com/serratirostris.html , as a source of nutrition. The shrimps will also take flake foods and have been observed gathered over a small piece of fish flesh. Be very careful with tap water and other chemicals, always prepare your make up water a week before you need it and keep it in a shady place in the garden where mother nature can add the final preparations to making it safe. The practise of doing a waterchange from the tap and adding chlorine remover as you go is not recommended.

Distribution : In Australia it is found in the NT and WA.

Selling details : Sold as individuals at or larger than 12 mm, minimum order 5