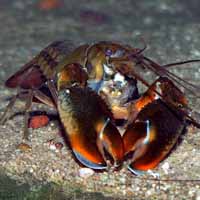 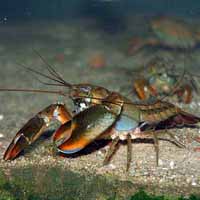 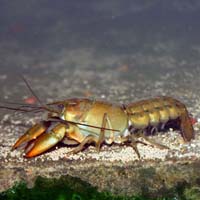 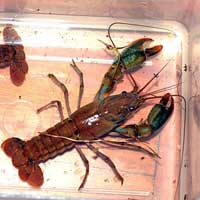 General information: These first came to Aquagreen from a Safari Hunting and Fishing operation in Arnhem Land on the Koolatong River. The operator Brenton Hurt was trying to get them identified. A photo was sent to Qld Museum where it was suggested it may be Cherax bicarinatus. If anybody wants to go on a fishing trip to the Koolatong River, Brenton's Guiding and Fishing business may be accessed through the web site http://www.territorybuffalosafaris.com/about_us.html and tell them you want to go on a little fish and yabby Safari. There is very little information known about the habits of this yabby in its natural habitat. They were found in drying buffalo wallows away from the river and have also been reported in Kakadu National Park by Rangers who have seen the photos. The photos are all males except the third one which is a mature female. males are more colourful than females. Immature specimens do not have the colour of the large ones and are light brown or tan with a stripe along the sides of the tail section.

Cultivation notes : Best kept in an aquarium over 60cm with plenty of structure for them to hide among. Also if there are more than one and no hiding places they may damage each other during moulting. Water quality is unknown from natural habitat but have been kept and cultured in hardness 50 to 100 ppm, carbonate hardness 60 to 110 ppm, pH 7 to 8, temperature from 20 to 32 deg C suggest that 27 may be a good temperature for this very tropical species. Diet, there is nothing known about the natural diet but they seem to do well on prepared frozen fish foods with some greens. They have been in aquariums with plants and dont seem to disturb the larger crypts and vals but shouldn't be trusted in the fully aquascaped show planted aquarium. They are easy to breed in captivity and will reporoduce easily in the aquarium that has plenty of hiding spaces. The eggs are carried on the females abdomen until they hatch and the little yabbies find hiding places out of their parent way.

Selling details : Sold as individual at 4 cm or over