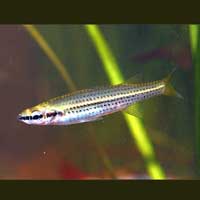 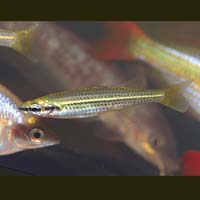 General information: This is a relatively small species of native fish growing to about six centimeters in natural locations and ten centimeters in captivity. Females are slightly smaller than males. It is a slender cylindrical fish with a pale bronze clear colour with a bright thin yellow and black line running along the centre of the side, the body is generally covered with rows of small black spots. Breeding males display bright yellow along the bottom half of their body. One population near Darwin in the Adelaide River drainage has maroon under side during the wet season breeding activities. The narural diet includes small invertebrates and algae. The species is a schooling fish that lives in streams, lakes and billabongs. It lives near shallow water around aquatic vegetation.

Cultivation notes : Water quality, it is reported to be able to live in waters from 9 tol 29 deg C, it has been found in the extremely soft waters from sandstone escarpment country to the limestone influenced big rivers of the top end. In captivity they will eat algae, prepared foods and some flake foods but will do very poorly on a diet of just flake foods. It is always a good practise to give two or more feeds of small live foods each week. They can be bred in a similar fashion to rainbowfishes and have slightly larger eggs than the average rainbow. They are a very peaceful fish and will go well in the community aquarium witht other small peaceful species. It may help keep algae under control in the planted aquarium as it is seen picking at algae in the production ponds.

Distribution : This small fish has a very large distribution in the top end of the NT, down the eastern parts of Qld and throughout the Murray Darling system. It is reported to be rare in its southern range but still very common in the north.