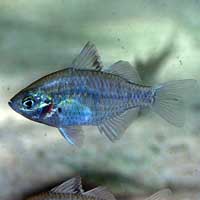 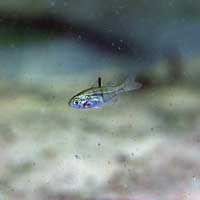 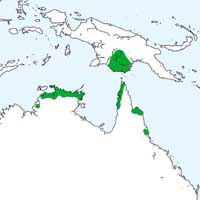 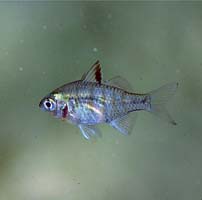 General information: It is a small perch like fish belonging to the Glassfish family. It is the smallest of the glassfish family in Australia growing to approximately 4 centimetres. They are usually found in association with thick aquatic vegetation in backwaters and billabongs. They are a schooling fish generally silver grey to gold in colour with about 5 vertical darker bars on the sides. Males have more colourful fins during breeding times that will be mauve, red or maroon. They are reported to be carnivores eating small micro-crustaceans and aquatic insect larvae in their natural habitat, they have small mouths and a peaceful disposition that are OK with other small community fishes. The specimens cultured at Aquagreen originate from Darwin River, Anniversary Creek and Burtons Creek in the NT. The water quality in the places these fish came from has been measured and recorded on the ANGFA database, maximum and minimum and averages are listed as a guide. Temperatures from 19 to 35 average 27 deg C , pH from 6 to 7.4 average 6.5 , Hardness approx 51 ppm , Alkalinity approx 48 ppm.

Cultivation notes : Aquagreen has not been able breed these small fishes in an aquarium, attempts were made with spawning mops in various sized aquariums to get them to breed but even though males were observed more brightly coloured displaying no eggs or fry were observed. The initial observations of fry were noticed in a 9 ton pond, an old above ground swimming pool full of green water that was being used to raise plankton. The adults were then put in a pond with Vallisneria growing in approximately 25% of the pond area where newly hatched fry have been noticed from about September through to April, the warmer months where the water temperature varies from 27 to 32 deg C. The diet in the ponds is local NT plankton cultured from Billabongs around the Howard River. Adult diets are supplemented with commercial aquaculture feeds. In the aquarium it is recommended that small frozen foods be used supplemented with two or more lots of live foods per week. These fish have a reputation for being difficult to feed with prepared foods such as flakes. Initially wild caught specimens were put with small flyspeck hardyheads that were used as trainer fish to get the Penny Fish to feed on prepared foods.

Distribution : Recorded from several places in North Queensland, across the top of the Northern Territory and in Southern New Guinea.