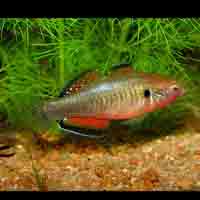 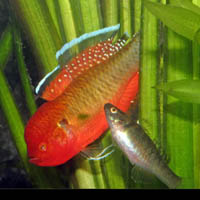 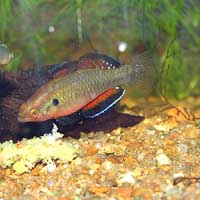 General information: This smallish common gudgeon grows up to 12 centimeters in length but is more commonly 40 to 50 millimetres. They form large schools in the Northern Territory and move from lower estuarine reaches inland at the tail end of the wet season. They have small mouths feeding on small crustaceans, small aquatic insects, some algae and detritus. It forages among vegetation and leaf litter, working the mid depths to the bottom of the pool. They hang near vegetation and are more common in the smaller coastal streams. It would appear that they spawn all year around in places where there are warm temperatures and plenty of food. It is suspected that the tiny larval fry wash into the estuary in the wet season then as they change to small fish drop out of the plankton and swim back up the rivers.

Aquarium notes : This is a very easy fish to keep in an aquarium, they are peaceful and get along with most other fishes. They are easy to feed and seem like the perfect aquarium fish except for the tendency to jump out of the aquarium without a lid, especially when first put into the aquarium then during thunder storms. They have broad environmental tolerances with temperature range from about 10 deg C up to 35 deg C with pH ranging from 3.5 to 9. These are very difficult to produce in captivity. They spawn readily in the aquarium but the eggs are extremely small and require tiny first foods. Aquagreen has had no success trying to raise them in an aquarium but recently while attempting to raise small atyiid shrimps in pond culture using natural planktons from NT estuaries a few pair of adult fish were added to the pond with the shrimps then fry were noticed. Salinity started about 17 ppt and was down to 10 ppt after early seasonal rains. The fry were removed about 15 mm in length and put into fresh water. The photos from left to right are a young male from a river near Darwin NT, second photo is a pair during spawning activity, the female is the smaller less colourful fish, the next is a distribution map and the last photo is a young male eating pea and prawn puree. A mix made from mincing 30% peas, 10%corn and carrots, 30% frozen bait prawns and 30% fish fillet. It also has about 100 grams of the vitamin supplement calcium ascorbate added per kilogram.

Distribution : This species has a large distribution in coastal areas of eastern and Northern Australia. It also occurs in New Guinea.

Selling details : Sold individually at or above 3 cm length.

Reference: Allen, Midgley and Allen, (2002)"A Field Guide to the Fresh Water Fishes of Australia"