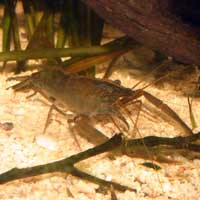 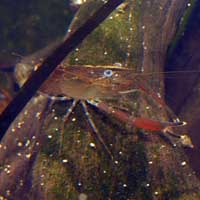 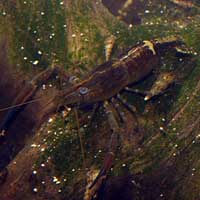 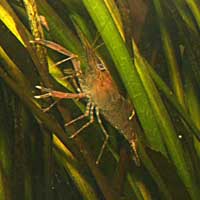 General information: It is one of the smaller River Prawns restricted to fresh water. It is reported to grow to 63mm but specimens in captivity can grow larger. Females are slightly smaller than males and appear to have smaller claws. It is found in permanent streams and mostly in vegetation in areas of noticeable flow. It appears to prefer well oxygenated clean water and has not been collected by Aquagreen in any billabongs or places where the water is stagnant.

Cultivation notes : This species is less tolerant of poor water quality and thus a little harder to keep than Macrobrachium bullatum. They do well in an aquarium that has harder water and with plenty of water flow. The females have larger and fewer eggs than other Macrobrachium. They will breed in the aquarium if there is plenty of cover. It is not known for any snail eating capability as their cousins the M. bullatum. In captivity they seem to eat most prepared foods that get past the fish. They mostly stay hidden in the daylight sometimes coming out for feeding. They are out and about in the aquarium when the lights are out. The average water quality for the aquariums and ponds where they are raised is temperature of 26 to 30, pH 7 to 7.8, Hardness 40 to 100 ppm, Carbonate hardness 50 to 110 ppm. the ponds where they are raised are well aerated, they do not survive in a still pond for very long. The rivers where thay occur can have much harder water. The Daly River water quality is available on the ANGFA database.

Distribution : Southern New Guinea and Northern Australia from the Victoria River in the NT across to the Norman River in Qld.