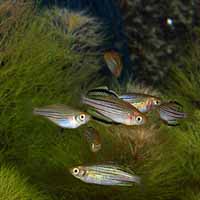 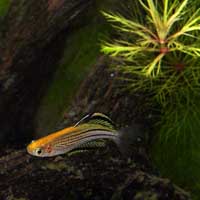 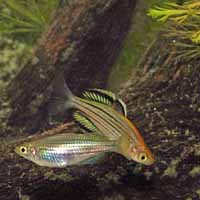 General information: This attractive form of McCulloch's Rainbowfish was collected from Skull Creek which is a tributary of Burster Creek near the top of Cape York in Queensland. Rainbowfish are all slightly different depending where they originate from, there is a red form from near Cairns. This red form of McCulloch's Rainbowfish was one of the first Australian Native fishes to become cultured and distributed into the Aquarium Trade and hobby. It grows to about 4 cm and males can be recognised by slightly longer fins than females. The preferred habitat for this species is small coastal creeks and swamps with plenty of aquatic vegetation.

Cultivation notes : They are one of the smaller rainbowfishes very suitable as a community aquarium species. If kept in a planted aquarium as a one species aquarium or with some other species of small fishes the males will set up a territory and display to each other and try to attact females into the plants to spawn. Ideal for an aquarium of around 60 cm with plants. Water quality from known locations is generally soft with a low pH but these fish are quite adaptable and can live in a wider range of water qualities. They are easily bred in the aquarium and if kept as a few specimens in a large planted aquarium young rainbowfish should survive and grow with their parents.

Selling details : Sold as individuals at or over 2.5cm