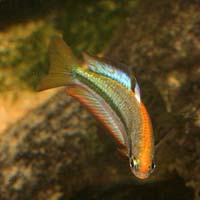 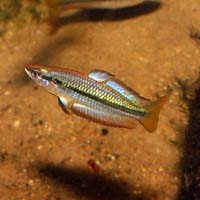 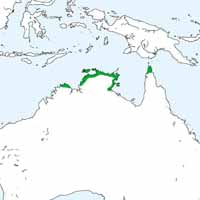 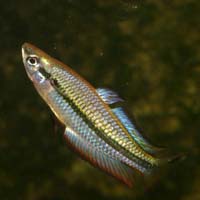 General information: It is a relatively small member of the Rainbowfish family except there are some in Litchfield national Park that grow up to 100mm long. They are usually found about 60mm long. They are usually found in fresh water streams closer to the coast. Where this fish has been collected members of ANGFA have recorded details of the water quality. These are averages and it should be remembered that most collections are made in the dry season when conditions are different from the wet season. Temperature average 26 deg C, pH average 6.9, carbonate hardness 64 ppm, general hardness 85ppm. The natural diet of this species is unknown but is thought to be the same as other smaller rainbows, small insects both aquatic and terrestrial, algae, small crustaceans. Rainbowfishes breed throughout the year when conditions are good. The male finds a location and displays to females that are near. Females can lay approx 40 to 100 eggs a day if conditions are good.The Black-banded rainbowfish were collected at Goeorge Creek about 100 km south of Darwin, this form was selected because it is one of the best looking forms around Darwin.

Cultivation notes : It is recommended that a minimum size for an aquarium to keep a small group of these fish is 60 cm. They are a schooling fish and are best kept in a group of five or more, with a ratio of two to one males to females will get the best colour display each morning. The best set up aquarium has dark gravel and some plants but with a clear swimming area and some current. They like clean well oxygenated water and will benefit from plenty of water movement. Water quality parameters are not too important as the species has broad tolerances. In captivity rainbowfishes will accept most prepared foods supplied. It is best if they can be offered at least one third to a half vegetable matter. About 5 adults with three females are a good number to use for breeding. Spawning mops can be used to collect eggs from a group of fish in an aquarium. Eggs hatch in a few days to a week and can be raised easily using commercially available fry feeds and plankton cultures. They are a peaceful fish that will fit in well with most other fishes of the same size.

Distribution : Recorded from several places in North Queensland, across the top of the Northern Territory and the northern portion of the Kimberley region of WA.