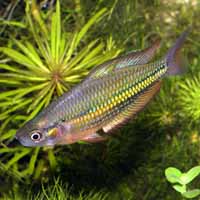 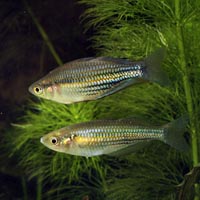 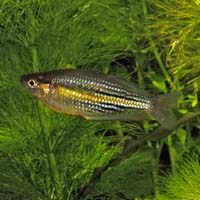 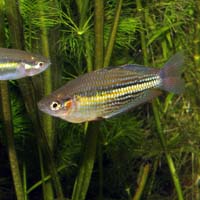 General information: This small rainbowfish had been placed with Melanotaenia splendida, however taxonomists such as Peter Unmack and Michael Hammer are working on the morphology and DNA comparing it with other Eastern Rainbowfishes. The members of the Australia and New Guinea Fishes Association have always thought the fish to be different. It occurs in the upper tributary of the Burdekin River known as Running River. In recent times a lowland form of Eastern Rainbowfish has been interbreeding with this form and fears were raised about the hybridisation caused demise of the Running River Rainbowfish. Peter Unmack and the Australian National University with support from ANGFA members started a crowd funding project to investigate the best avenues for conservation of the species. It has been bred into numbers and distributed to ornamental aquaculture. It has been translocated to a section of the river that has no rainbowfish. The stock at Aquagreen comes from Peter Unmack and will be maintained in two large ponds away from any other rainbowfishes. A percentage of the monies from the sale of this fish will be channed back to other small native fish conservation projects. Particularly those run along the same methods.

Cultivation : They are kept the same as any other rainbowfish, a small group in a 90 cm aquarium with some native plants makes a nice display. Rainbowfish diet in their natural places includes insects, algae, small crustaceans. They can be fed flake foods, small good quality aquaculture pellets and a regular weekly or twice weekly addition of live foods such as mosquito wrigglers, daphnia or some other small live food will keep them in good health. There are some good prepared foods you can make from supermarket ingredients. See the guides section for the pea and prawn puree preparation method.

Selling details : Sold as individuals about 2.5 cm or larger, not sold in NT

Reference: Unmack & Hammer (2015) "Fishes of Sahul; V24 NO. 9, Burdekin River Rainbowfish on the vergeof dissappearing from Running River" , Tappin A., (2013) Home of the Rainbowfish http://rainbowfish.angfaqld.org.au/splendida.htm