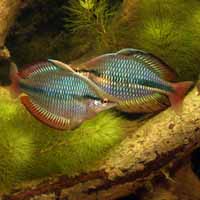 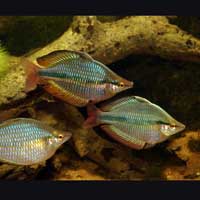 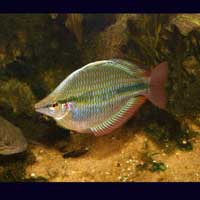 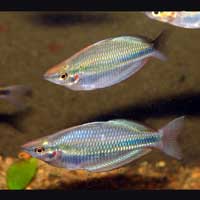 General information: Banded Rainbowfish vary in appearance depending on which river system they are found. The form from the Cato River is mostly blue with small amounts of other colours such as slightly red fins. The colours intensify in older males especially when they are displaying to each other as a ritualised territorial battle where very little harm is inflicted upon each other. The first three photos are of large adult male fish, the last photo is smaller fish about 4 cm that are not displaying intense colouration. This species can grow to 12 cm but is usually 10 cm full grown. The sexes in the banded rainbowfish are a little more difficult to differentiate but generally males are more colourful with slightly deeper bodies, the males have slightly longer fins but this difference is not as pronounced as it can be in as in other rainbowfish species. The habitat where brood stock was collected is a large spring fed coastal river. Water quality measurements were taken when the broodstock was collected. The measurements were made in the late dry season. Temperature 27, pH 6.4, dissolved oxygen 6.1 mg/litre and conductivity 36 mS/cm. Wild rainbowfish diets are reported to include algae, aquatic insects and small crustaceans. The male finds a location and displays to females that are near. Females can lay approx 40 to 100 eggs a day if conditions are good. The Cato River is approximately 280 km South West of Nhulunbuy runs West into the Arnhem Bay.

Cultivation notes : It is recommended that a minimum size for an aquarium to keep a small group of adult fish is 90 cm. They are a schooling fish and are best kept in a group of five or more, with a ratio of two males to one female which will get the best colour displays from the males each morning. The banded rainbowfish appears to need higher dissolved oxygen levels than other rainbowfishes and is the first affected if the carbon dioxide plant fetiliser is adding too much co2 or some other factor lowers dissolved oxygen levels. The form from the Cato River is less tolerant to cooler temperatures than the Goyder River red forms. In captivity rainbowfishes will accept most prepared foods supplied. It is best if they can be offered at least one third to a half vegetable matter. About 5 adults with three females are a good number to use for breeding. Spawning mops can be used to collect eggs from a group of fish in an aquarium. Eggs hatch in a few days to a week and can be raised easily using commercially available fry feeds and plankton cultures. They are a peaceful fish that will fit in well with most other fishes of the same size.

Distribution : Recorded from several places in North Queensland and across the top of the Northern Territory. Specimens in the photos were collected from the Cato River