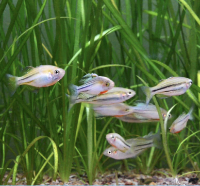 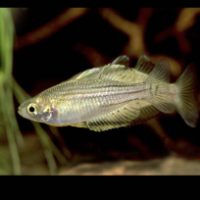 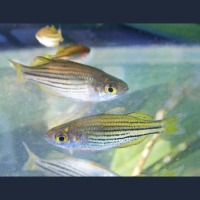 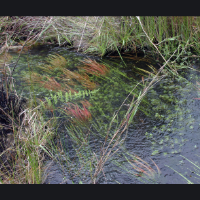 General information: In 1988 Dave and Robyn Wilson came to the NT. While looking for Spotted Blue-yees found a small rainbowfish in Burton's Creek and took them to the local Museum. In 2019 the Curator of Fishes at the Museum and Art Gallery of the NT, Michael Hammer, with some of his Icthyologis collaborators described the little rainbowfish. It is much smaller than its closest relative, McCulloch's Rainbowfish and behaves differently, being more shy with strong schooling tendencies. In the natural world rainbowfishes are omnivores eating small crustaceans, insects, algae and other plant material. In the aquarium they will take prepared foods and other small live foods. The areas they are found the water quality is very soft, they live among thick vegetation in natural peat swamp and small sandy billabongs at the side of the creek or small river. They are more shy than the usual rainbowfish and prefer a well planted aquarium. The photos are by Michael Hammer and Gunther Schmida. The last photo is a section of Burton's creek showing a small sedge, Xyris indica, Limnophila chinensis and Blyxa aubertii for those who like a biotope aquarium.

Distribution : Reynolds and Finnis Rivers of the Northern Territory