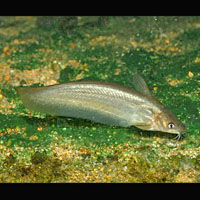 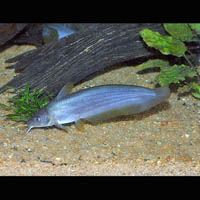 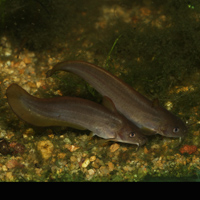 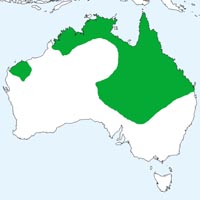 General information: A small silvery tan eel tail catfish with yellow fins. A schooling fish with a carnivorous diet of small insects and crustaceans. In the aquarium it is best kept with a few of its friends because they are a schooling fish in nature. A captive diet should consist of some insects such as blood worms and some chopped prawns. Earthworms will be accepted readily. A small group in a planted aquarium over 90cm wide will be a good display. They have been reported to spawn in aquaria but there is no record anyone raising fry from a natural spawning. Bruce Samble has raised them from an hormone inducement spawning. Water quality is not critical, they have wide tolerances to temperature pH and hardness. They are best kept between 20 and 30 deg C but can survive between 10 and 36 deg C. Found in pH from 5 to 9.7, water from clear to very turbid, soft or hard water. Another very good use of this speciesis snail control. They will eat small snails from your aquarium.

Distribution : It is found in tropical rivers from Ashburton River WA across the top of Australia to Mary River Qld. Also in the central areas of Australia, Finke river NT and Lake Eyre.