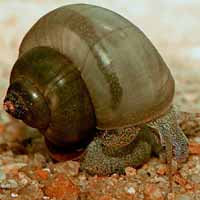 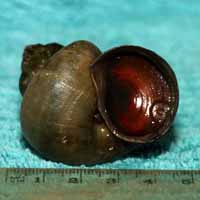 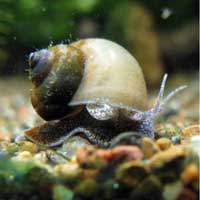 General information: A Mollusc in the family Viviparidae, Australia's largest freshwater snail. The Mollusc Scientist at the NT Museum, Dr Richard Willan, suggested this species as a possible nice display animal for Aquaria. In March 2005 I obtained some of these snails from a permanent waterhole in central Australia. They have been trialled with aquarium plants and to date have not eaten any living plant tissue. It is a live bearing species and in the photos you can see a very young pale cream coloured specimen sitting on a ruler.

Husbandry notes : The water quality for these snails does not appear critical but they do appear to fare better if the water is a little hard. They also do not tolerate low dissolved oxygen levels, this is never a problem in a well run planted aquarium. In some of my very soft water ponds they have difficulty producung shell. I asked Dr Willan what to feed these unique snails and was told they eat Periphyton in the real world. A quick look in Wikipedia found, "Periphyton is a complex matrix of algae, cyanobacteria, heterotrophic microbes, and detritus that is attached to submerged substrata in almost all aquatic ecosystems." Bacteria slime and algae grow in my aquariums and the snails do very well in an aquarium with plenty of detritus.

Reference: Personal communication with Dr Willan at the NT Museum of Arts and Sciences.