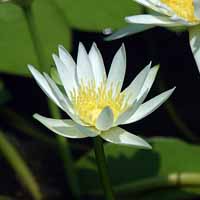 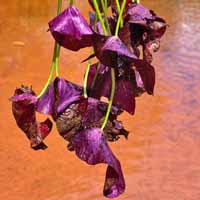 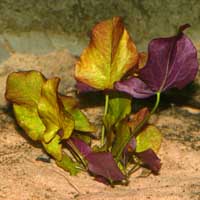 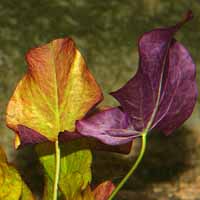 General information : This is a recently described lily from the Jardine River system, Cape York. The second photo was taken by Neil Armstrong in the early 1990's. It has been kept in cultivation by aquarists who admired the colours of the submerged leaves on young plants. It has a number of nice colours in the submerged young leaves ranging from dusty orange, to red to maroon to blue. It has large mature leaves which are light green with a blue underside, when mature it grows into a large water lily. The flower is white in colour opening in daylight hours making the lily attractive and useable as a nice pond plant in the tropics.

Cultivation notes : No water quality or substrate data is available from the Jardine River. The conditions which have been successful at Aquagreen are, temp about 27 to 30 deg C, hardness about 50 to 100 ppm, carbonate hardness about 60 to 110 ppm, pH around 7 to 7.5. substrate fertiliser and carbon dioxide pH control. It can be kept nice in an aquarium for many years without losing the nice submerged leaves. This is information from Surrey Jacobs the botanist who described the lily.

Distribution : In Australia known only from the Jardine River system but it is also found in New Guinea.

Selling details : Sold as an individual plant with the roots washed free of substrate.