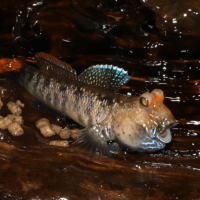 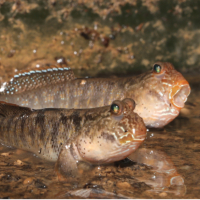 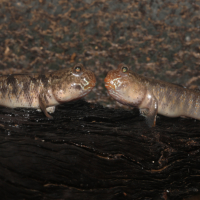 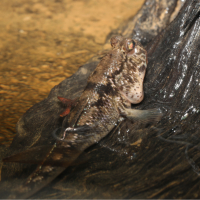 General information: This is a slightly larger than usual mudskipper reported to grow to 10 cm. It is the species that penetrates furtherest upstream in the tidal sections of the big rivers. It has been found in the freshwater tidal parts of the Daly River. The natural diet is bot reported however they were observed chasing small flying insects on the banks of the Daly River. In the aquarium they take small pieces of prawn, our pea and prawn mince and 1.5mm marine float pellets made by Ridley. They have been observed chasing and eating termite alates in the aquarium.

Distribution : It is recorded from Irian Jaya, Papua New Guinea and Northern Australia. In the Northern Territory it is found in the tidal reaches of large North flowing rivers and appears to be the one that penetrates the furtherest inland. It is in the tidal freshwaters of the Daly River.