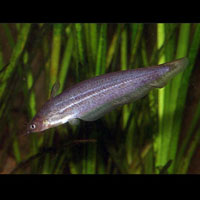 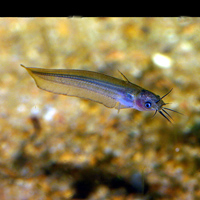 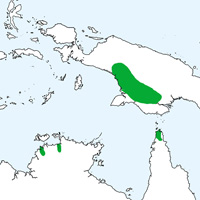 General information: Australia's smallest catfish, growing to 12cm but usually about 8 cm. In the Northern Territory they live in places that are thick with aquatic plants with slow flow. In captivity they are best kept in a heavily planted aquarium. In the real world they are reported to eat small crustaceans, aquatic insects and small molluscs such as snails. They will not eat prepared flake foods and are best fed on frozen brine shrimp frozen bloodworms and tubifex. Spawning activity usually occurs at first light when 3 to 4 males persue a female through the aquatic plants for some time then one will fold his body around the female. I assume at this time eggs and sperm are released. Spawning behaviour has been observed in an aquarium packed with vallisneria. The catfish are produced by natural means in a 5 ton pond where a plankton bloom has been established and there are many aquatic plants.

Distribution : Magela Creek in Kakadu and small creeks that run into the Adelaide River, East Alligator River and Daly Rivers in the NT. The Jardine and Wenlock Rivers in Qld as well as the Fly River area of New Guinea.