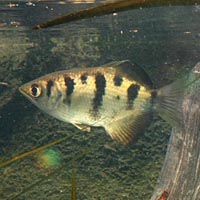 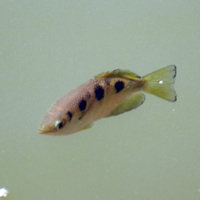 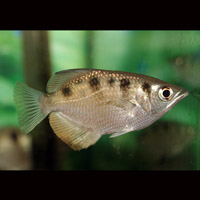 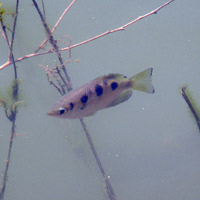 General information: This species is also called seven spot archerfish and rifle fish. They get the name rifle fish from their ability to shoot a small stream of water at insects knocking them into the water. They also eat flowers from over hanging trees, crustaceans and small fishes. Archerfish grow to about 30 cm and have been reported to 40cm. Their preferred habitats are estuarine in marine water to fresh water well inland around over hanging vegetation where they watch for prey. They make very interesting aquarium subjects and are best kept in an aquarium with some space above the water and some branches or other place where they can shoot water at insects. The best water quality is hard alkaline, carbonate hardness about 80ppm, hardness over 100ppm, pH over 7.5 with some salt if possible, 5 to 10 parts per thousand is easy to maintain. Captive diet should contain some shrimps and some insects, they also eat aquaculture pellets.

Distribution : Archerfish occur from Derby in WA around the coast through NT and to the Burdekin River in Qld as well as New Guinea and Asia to India.